Now a very popular format, ten years ago audiobooks were still making a shy debut – just when I needed them most. Reading has always been my biggest hobby, but as I worked in an office all day with my eyes fixed on a computer screen, traditional reading became impossible. My eyes got tired easier, my neck became stiff from bending over a book. That was when my husband suggested I tried audiobooks.

At first I was reluctant. It seemed weird listening to someone read a book out loud, but one day I took a chance and bought an audiobook. I remember it was Sandra Brown’s Smoke Screen, which was lucky because the narrator, Victor Slezak, is simply magic. From the first moments I was hooked by his way of bringing the story to life. Especially since I’m a multi-tasker and I can do my house chores or walk in the park while enjoying my favorite books. A love affair had begun!

Fast forward thousands of audiobooks listened and a career change later, and here I am today – a writer myself, who’s just released her second audiobook!

UNABRIDGED is a romantic comedy I’m particularly proud of. The narrator, Mary Leckie, has done a fantastic job, and soon you’ll be enjoying more of my books read in her enchanting voice. We also have a surprise guest, interpreted by the very talented Jon Adams. He confessed to me that he had trouble recording his parts because it was hard to stop himself from laughing.

The story behind Unabridged is an adventure I talked about in a very honest blog post. I initially wrote it in 2015, and it was a bestseller at the time of its release. The first edition received mixed reviews, most of them in the extremes—either 1 star or 5 stars. People either hated it or loved it. No shades of gray there! I was intrigued by the readers’ strong reactions, and since I always pay attention to reviews and comments, I started making notes. Some of them were mean for the sake of meanness, but others raised valid points, which in the end helped me make Unabridged a better book.

Last year I finally managed to rewrite it with the help of my great editor, Susanne Matthews, and I’m thrilled to hear it now in audio version. 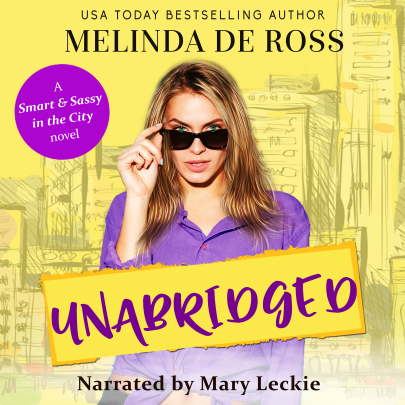 Everyone believed I was an idiot to leave Blade Spencer—rich, handsome, and head-over-heels in love with me. But I did it for his own good, determined to take the secret to my grave.
I moved to Seattle, pursued my career as a journalist at Unabridged magazine, and almost convinced myself I didn’t need a man. I had enough virtual admirers, and my email was jam-packed with marriage proposals and X-rated pictures—not to mention hysterically funny letters from a clever fan.
Imagine my surprise when I show up at work, and Blade is my new boss. Did I mention he has no idea why I left him and thinks I’m a cold-hearted bitch?
Just as I decide to prove him wrong, I discover Blade’s life has changed in ways I never imagined. Having to work with him is the least of our problems…

Due to delays caused by the current worldwide situation Unabridged is not available on Audible yet, but you can find it on Chirp (available in the US only), Nook, Kobo, Audiobooks.com, SCRIBD, and more.

Here’s a sample I posted on YouTube for your entertainment!

Do you listen to audiobooks? What’s your favorite genre? I’d love to hear from you, so feel free to tell me in the comments. 🙂